For this post I am participating in Adopt a Gluten-Free Blogger. I chose to adopt Amber from The Tasty Alternative . She is super friendly and has made my first few weeks as a blogger very fun. In fact she seems fun. (And has a fun font on her blog.) Amber has quite a few recipes that I want to try. I was recently tempted by her Chewy Granola Bars, which I have respectfully renamed Nutty Seed Bars (because my family already has a “Granola Bar” recipe, so I need a different name for the kids).  I made them, and followed the recipe … but I think I should have chopped the nuts a bit smaller. I put a piece of parchment paper over the mixture and tried to “whack it” but that didn’t work so I used a rolling pin- which did the trick! (Also my husband is allergic to walnuts so I subbed in pecans.)

Then my daughter and I embarked on a mission to make it cute.

Before I stopped eating sugar I loved decorating ginger bread houses. As soon as I figure out how to make a good “glue” frosting without sugarcane, I will be back to making them at Christmas time. Setting that idea aside for a moment, I decided to try a small Nutty Seed Bar “House”. Then we decided to make it a barn. And my daughter built a fence. And added some animals… She really did a nice job and had a lot of fun.

I reduced honey on the stove-top and mixed that with cashew butter. It made a decent glue. Sort of. It was a hot day and when the sun hit the barn the whole thing collapsed. Just as well because we were going to eat it anyways!

As for Amber’s recipe:

The bars taste fantastic. If I made them again I would omit the cranberries. They have a strong flavor and I would rather enjoy the flavor of the apricot and cashew butter. (That’s just me.)

The bars held together well under normal circumstances, but in the heat (we took them on the bike path and it was over 85), they got soft. This happened with the bars I made for my cookbook– but I discovered a solution while testing for the book. Adding a couple tablespoons of coconut sugar to the recipe adds strength and heat resistance. Or, just be happy to eat these delicious bars on a cool house or a bit soft on the bike path (which really is fine!).

8 thoughts on “Nutty Seed Bars and a Barn” 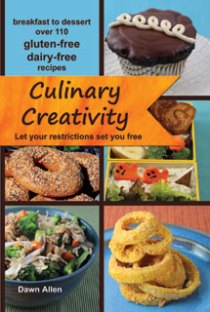 Purchase my book on Amazon